Silver for the Silver Creek

COVID-19 has resulted in the cancellation of any number of significant celebrations and events, not the least of which is the 25th Anniversary of the formation of the Blue Mountain Watershed Trust. 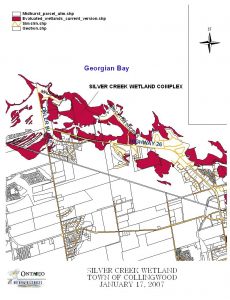 The roots of the Trust center around the Silver Creek Wetland, first designated as a provincially significant wetland in 1985. The Town of Collingwood passed a resolution shortly afterward calling for protection of the wetland and its retention as public access to Georgian Bay, this in spite of the fact that the wetlands were held in private hands. In 1991, the landowner dumped fill on the west end of the property. Protests by the Nature League, supported by Town Council, led to a resolution banning the dumping of fill in all wetlands within the Town limits. Thus began an ongoing public effort to foster and protect the Silver Creek Wetland from further interference and destruction. The Blue Mountain Watershed Trust Foundation (Watershed Trust) was incorporated in 1995 and took up guardianship of the Wetland from the Nature League.

In 2001 the Watershed Trust took its first affirmative action in defense of the Silver Creek Wetland when a proposal was brought forward to construct a golf course on the Wetland. To prevent what would amount to wholesale destruction of the wetlands, the  Trust called on the Town to enact an Interim Control Bylaw (ICBL) to protect the Wetland until the Town’s revised Official Plan, recognizing the protected status of the Wetlands, was in place. Council passed the ICBL and the landowner appealed the decision to the Ontario Municipal Board (OMB). The Watershed Trust bravely took up participant status to support the Town in the appeal. The OMB upheld the Town’s ICBL and the appeal was dismissed. The Town was able to pass the Zoning By-law to designate the lands as Environmental Protection, thus prohibiting development activities.  The same year the Trust’s Watershed Action Group (WAG) came into existence and became the technical resource and activation “workhorse” whenever organized effort in protection of the Wetland was required.

Led by the tireless efforts of Greta McGillvray, Mark Peacock, now CAO of the Lower Thames Conservation Authority, and Norm Wingrove, who is still active on our Board today, the Watershed Trust and the Silver Creek Wetland Preserve Committee joined forces to protect its natural beauty and wildlife, to collect funds on behalf of the Town for the purchase and maintenance of the Wetland and to encourage its perpetual preservation. When the opportunity arose to acquire the property from the mortgage holder, the Trust urged the Town of Collingwood to preserve the Silver Creek Wetland in perpetuity by expropriating the lands. They presented a cheque for $10,000 to the Town as a “down payment” and pledged their best efforts to raise $100,000 in support.  While Council did vote to expropriate the west portion of the Wetland north of Hwy 26,  the action never went forward as the lands were purchased instead by the Consulate Development Group.

A few years later, the Watershed Trust and the Escarpment Biosphere Conservancy met with the owners of a farm which straddled Silver Creek south of Hwy 26 regarding a potential land donation. Unfortunately, the owners declined the purchase. This is now the site of the proposed Huntingwood Trails development, which the Town has denied and is currently under appeal at the Local Planning Appeal Tribunal (LPAT, formerly the OMB). The Trust is actively supporting the Town at the LPAT.

In 2006, a residential development proposal for the Consulate East lands came before the Town, which was also denied and was appealed to the OMB.  At the time, the late Don Kerr took special interest in the property and did an exhaustive survey of the lands for potential species at risk. Don was the first to discover proof of habitat of the endangered spotted turtle in the Silver Creek Wetland. To ensure that the potential environmental impacts were clearly understood by the OMB, the Trust commissioned an environmental consultant to assess potential for harm to the Wetland. The Trust successfully gained Special Participant status to present our expert environmental witness at the hearing.  While the residential development proposal was ultimately approved by the OMB, it was granted only with stringent regulations for safe implementation. To date the development has not been started and most recently, the proponent has put forward a draft proposal to double the density on the same lands.  Once again, the Trust has been successful in raising funds to undertake an updated environmental impact study and will be ready to present evidence, should the proposal begin to move forward. To date, however, the Town has not approved the proposed expansion.

George has collaborated with local golf course greens managers with the result that overall pesticide use by golf courses has been reduced by 34% since 2008. Under George’s direction, scores of Watershed Trust volunteers have assisted in mapping and removing invasive phragmites from the shorelines abutting the Silver Creek Wetlands, removing around 4000 kg of Phragmites a year from the Georgian Bay shoreline from 2012 to 2019.

The Trust’s most active file today is 26/27 Sideroad.  The Trust’s WAG Committee has tirelessly led opposition against the closure of County Road 91 and expansion of 26/27 Sideroad, commissioning reports, making deputations to Councils, engaging expert witnesses and legal counsel to appear at hearings and working closely with the Niagara Escarpment Commission.

Trust members have been successful in raising some $300,000 over the past 25 years, almost all of which has been spent on legal and scientific supports to advance the mission and protect our precious watershed.

The membership of the Watershed Trust has fluctuated over the years, and the Trust has been challenged to sustain public interest. A strategic plan update was completed in 2019 with the assistance of an NGO consultant, and the membership has been revived as a result.  Recent efforts to develop upbeat events of relevance to everyone, like “See the Salmon” and the “Be the Change” film series have been successful in raising funds and reinvigorating membership.

The changing demography of our region, with the influx of young families and the growing concern about climate change, has revitalized the Trust’s membership and action, and the next 25 years hold both great promise and great importance vis-à-vis the sustainability of the Silver Creek Wetland and the Blue Mountain Watershed.