The Silver Creek watershed drains an area of approximately 2,700 hectares. Flowing down from the Niagara Escarpment through the Town of Collingwood, it is a significant coldwater habitat according the Ministry of Natural Resources, and likely the most pristine Rainbow Trout and Chinook Salmon spawning stream in southern Georgian Bay.

This watercourse flows north from Lake of the Clouds on the Castle Glen property, along Osler Bluff Road and through fields and forest, crossing under Mountain Road and Highway 26 to its mouth in the Provincially Significant Silver Creek Wetland at East Black Bass Bay of Nottawasaga Bay. 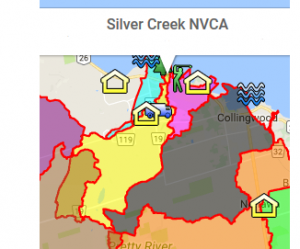 Silver Creek is a spawning ground for Rainbow Trout, Chinook Salmon and Brown Trout, among other species like crayfish and dace. It is in very good condition. The biggest threats are from development. Many undeveloped parcels along its length are owned by numbered companies, which does not bode well for its future.

You can see the Rainbow Trout (spring) and the Chinook Salmon (fall) thrashing their way up Silver Creek at Highway 26, at the pedestrian bridge on the Georgian Trail, at Mountain Road and (best) at the bridge passing over Sideroad 12 at Osler Bluff Road.

This watershed suffers from few erosion problems thanks to its heavy forest cover, rock and gravel stream bed and few areas where the creek runs through agricultural land. The Nottawasaga Valley Conservation Authority (NVCA) has done a few stream bank rehabilitation and exclusion fencing projects in the lower section.

The Silver Creek Wetland, at the mouth of Silver Creek, covers an area of approximately 166 hectares. This Provincially Significant Coastal Wetland consists of four small, individual wetlands both in The Blue Mountains and Collingwood along the Nottawasaga Bay shoreline. The Wetland provides a variety of important biological, social and hydrological functions.

This large Wetland is one of the few remaining on Nottawasaga Bay and plays a vital role as a habitat and spawning ground for a diverse variety of birds, fish and plant species. Some are endangered or threatened; therefore their habitat must be protected.

In 1995, the Watershed Trust took up the cause of preserving the Wetland from the Nature League. In 2002, we were successful in convincing the Town of Collingwood to enact an Interim Control By-law (ICBL) to prevent a proposed golf course. The developer appealed to the Ontario Municipal Board (OMB), but the Board supported the Town. After an unsuccessful appeal to the Divisional Court, the golf course proposal was withdrawn.

Unfortunately, the approval by the OMB of the Castle Glen Resort Community proposal cast an ominous shadow over this watershed. It would never be allowed under the present Niagara Escarpment Plan, but was permitted by the OMB in 2006. The proposed development resides in The Town of The Blue Mountains at the headwaters of Silver Creek. Ultimately, it could comprise 1,600 residential units including the existing Thunderhill subdivision of 75 units, 300 hotel or commercial accommodation units, a golf course and 5,000 square meters of related commercial space.

The Watershed Trust has developed a vision and a plan to preserve this Provincially Significant Wetland. We are working with the Town of Collingwood, The Blue Mountains and the Conservation Authorities to ensure its permanent protection.

We have also been monitoring the storm runoff effects in Townline Creek and Silver Creek. Click here for our 2015 findings.