The second largest watershed in the Blue Mountain Watershed

The Pretty River is the second largest river in the Blue Mountain Watershed and drains an area of 7,700 hectares. It provides a high-quality cold water fish habitat and sustains a rich variety of aquatic life. As it descends the Niagara Escarpment, the Pretty River is river forded in several places by the Bruce Trail and other trails.

The Pretty River’s headwaters are located on the Niagara Escarpment. It flows down the beautiful Pretty River Valley and drains into Nottawasaga Bay to the east of Collingwood Harbour. The section that passes through the Town of Collingwood was contained by a dike in the 1970s for flood control purposes. There is an overflow outlet at the mouth.

The Pretty River and its tributaries have an abundance of gravel beds and large deep pools which provide habitat and spawning grounds for Rainbow Trout, Chinook Salmon, Speckled Trout  and Brown Trout, among other species. 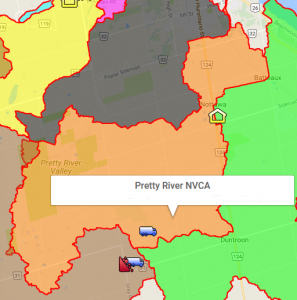 You can see the Rainbow Trout (spring) and the Chinook Salmon (fall) thrashing their way up the Pretty River from the path along its west side from Highway 26 (Pretty River Parkway) up to the rail trail where it crosses Peel Street. Immediately south of Pretty River Parkway, the River’s base is solid limestone. A channel and a series of pools make this a popular spot for children to float down a section of the River in tubes during the summer. This is a traditional activity for the Collingwood Environment Network’s Summer Day Camp.

Another good place to access Pretty River is in the lower reaches of the Pretty River Valley where the Bruce Trail crosses the River adjacent to Pretty River Provincial Park. You can see the River from the Nottawasaga Lookout on County Road 31. Simply go to the end of the road and walk in.

The Pretty River is in good condition, with the biggest threat being development. Its upper reaches are well-forested. The portion that runs through Clearview Township is mostly agricultural land. The Nottawasaga Valley Conservation Authority has conducted stream bank erosion reduction projects and planting of buffer strips to alleviate warming of the water in partnership with the Georgian Triangle Anglers’ Association (GTAA).

There is an Area of Natural and Scientific Interest (ANSI) in the Escarpment uplands on the north slope of the valley. ANSI’s are protected from harmful land uses. The Blue Mountain Area ANSI covers 2,750 hectares and is the second largest protected natural area in the Blue Mountain Watershed. This ANSI is used to protect its excellent representation of crevice caves, Gibraltar and Banks moraines, extensive deposits of red clay and the occurrence of ice-contact sediment.

The Pretty River Valley and the area around it play an important role in maintaining the quantity and quality of water provided to the Blue Mountain Watershed. The Simcoe Uplands, which was formed by glacial movement and melting, is part of the four dominant landforms in the Watershed. The Simcoe Uplands land form includes the Banks moraine. At the southern arm of the Banks moraine, it forms a unique semi-circular barrier in the Pretty River Valley influenced by the Pretty River itself. Due to its coarse texture, the moraine provides an important groundwater recharge function. The groundwater eventually resurfaces to form the headwaters for many streams in the watershed.

For those of us with the good fortune to be able to enjoy this precious landscape, we must be proactive and take the necessary steps to protect this valuable and important headwater area.