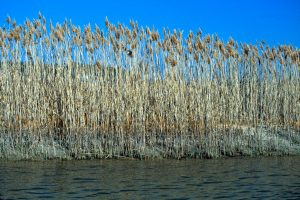 See photos from our August, 2017 phragmites cull on the shore of Nottawasaga Bay. 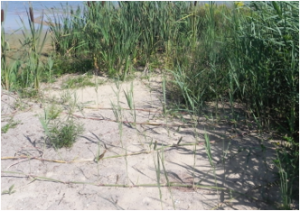 If left unchecked, Phragmites australis (which we will simply call ‘phragmites’) will cause serious damage to the biodiversity of our area. It out competes native wetland plant species, creating a monoculture that compromises desirable habitat for wildlife. Phragmites can impact species at risk such as the Blanding Turtle (Threatened) which cannot pass through the dense reeds (up to 200 stems per square metre). Phragmites also releases toxins from its roots into the surrounding soil, which impedes the growth of and even kill off neighbouring vegetation.

Phragmites thrives in disturbed, moist habitats and is often among the first species to colonize a new area. While it prefers areas of standing water, its stolons (horizontal stems or ground runners) and rhizomes (underground stems) allow its fine roots to reach out up to 20 metres to colonize an area and to find water. It is currently making inroads in the Provincially Significant Silver Creek Wetlands complex and choking beaches up and down Georgian Bay.

Past low-water conditions in Georgian Bay provided a favourable environment for the rapid colonization and spread of Phragmites. It is increasingly found in the protected shoreline areas, beaches and wetlands of the Blue Mountain Watershed. The recent increase in water levels are helping to wash out the edges of established stands, but alos move viable plant material to new locations. Phragmites can tolerate areas of high salinity and is now frequently found in road-side ditches. Run-off of de-icing road salts does not impact its growth. 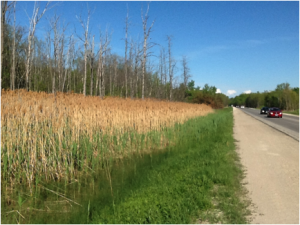 The word phragmites is derived from the Greek term phragma, meaning fence or hedge. Phragmites grows over 3.5 metres high—you will see it running along the north side of Highway 26 at edge of the Silver Creek Wetland in Collingwood. Several years ago, this stand consisted of cattails, grasses and wildflowers. Each fluffy-looking seed head carries approximately 2500 seeds, each of which can start a new colony.

Do you have this on your property? Contact Ontario’s Invading Species Awareness Program hotline at 1-800-563-7711.

How not to dispose of phragmites

To get rid of most weeds, you pull them up and compost them. Not so with phragmites. The plant will come back again and again. It will take root in the compost pile. If seed heads are near maturity, the seeds will spread from where they lie.

How to eradicate Phragmites 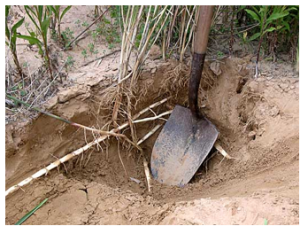 Phragmites Rhizomes can reach out over 20 metres

The best way to get rid of phragmites is to cut the plant below water level for three or four years in a row. When the plant is cut, it must be buried—it cannot be composted; it will simply start a new colony where it lies.

Imazapyr and glyphosate are two chemical herbicides that have successfully been used to rid areas of phragmites, but they have adverse effects on other plant species as well as water quality and fish/mammal/bird health.

For the past several years, the Blue Mountain Watershed Trust has worked with the Nottawasaga Conservation Authority to cull phragmites in particularly sensitive areas, notably along the shoreline of the Provincially Significant Silver Creek Wetlands. See photos

Keep an eye on our Facebook for upcoming cull announcements—we need lots of help, from cutting and hauling to providing refreshments. 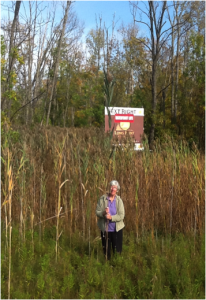 At a recent meeting organized by Gail Bascombe and Betty Beacon, concerned local residents who live in the White’s Bay area of Collingwood, David

Featherstone of the Nottawasaga Valley Conservation Authority made a presentation on Phragmites to a group of concerned citizens representing area condominium organizations. He underlined the seriousness of the problem and the need for community action to help to mitigate the adverse impacts of this invasive perennial grass that has caused severe damage to wetlands and beaches in our area for several years now. George Powell of the Blue Mountain Watershed Trust Foundation, Colin Dobell of “Stop the Invasion” and David Sweetman of “Georgian Bay Forever” also made presentations that reinforced this concern.

Of interest in this area is the recent work done at Lighthouse Point, a large residential development on the west of Collingwood. Access to the Bay from their beach was seriously impacted by a wall of Phragmites and the condominium owners, headed by Tim Morris, organized a Phragmites Pull and regained access to the beach.

From the discussion, the following observations can be drawn: 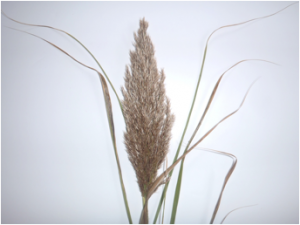 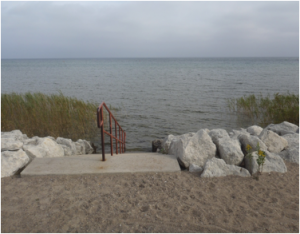 Newly cut path to the bay 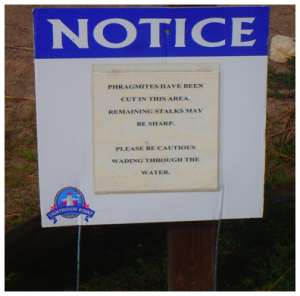 For more information on Phragmites in the Collingwood/Blue Mountains area, here is an excellent resource from the Nottawasaga Valley Conservation Authority.

Georgian Bay Forever has produced this amazing video showing how our community’s partners are helping to manage phragmites:

2012 Report on State of Phragmites- ontario.ca