Developer Wants to Double the Density Within the Silver Creek Wetland

We made a submission to the Public Meeting in Collingwood on March 25, 2019,  regarding the proposed zoning by-law amendment for Bridgewater on Georgian Bay. The essence of the submission follows.

The new proposal is essentially the same as the plan approved by Ontario Municipal Board in 2007 commonly known as Consulate East. The only difference in the new application is a 100 percent increase in density from 328 to a proposed 655 residential units. It is our position that a doubling of the density invalidates the former OMB approval; hence, this must be seen as a new application and open to appeal.

We pointed out that the determination of buffer width from the Silver Creek Wetland was a critical factor in the 2007 decision. Since buffer width is largely determined by the potential for negative impacts arising from human population pressure as well as the sensitivity of the surrounding lands, the 2007 buffers would be no longer valid. It was noted that the development proposal is surrounded by Provincially Significant Wetlands.

The Trust was a Special Participant in the original OMB hearing supported by an expert environmental witness. In our final summary remarks to the OMB at the time of the 2007 decision, we said: The OMB final settlement is a formula for long-term disaster for the wetland [it is a major residential development totally surrounded by a Provincially Significant Wetland]. This new Bridgewater application worsens the possibility of negative impact. We described the potential for harm due to automobiles, demands for hiking trails, off-trail intrusions, dogs, cats, pesticides and disruption of habitat for reptiles, amphibians, rare botanical species, etc. We all know that there is much room for a broad range of judgments and opinions depending on the degree of independence of the consultant. It is not an exact science.

Of course, there are reasons for intensification to avoid residential sprawl and the ensuing encroachment on natural areas; but, it must be done in a manner which does not negatively impact existing sensitive natural features. 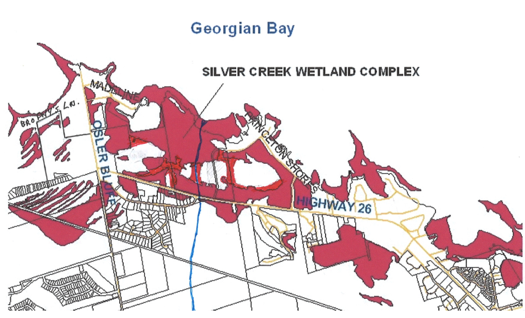 After the public meeting, the Conservation Authority (NVCA) submitted their comments in which they recommended a chain-link fence and evergreen trees at the boundary of the development.

We met with NVCA on April 24 to understand their rationale for choosing fencing and trees to protect the wetland versus expanding the buffers. It was their opinion that, since the revised proposal was within the 2007 OMB approved boundaries for the development, the buffer widths were not open for review. We explained our position that the buffer widths should be reviewed due to the greater potential of the doubled density for “negative impact” per S.2.1.8 of the Provincial Policy.

We questioned the effectiveness of fencing and vegetation to prevent incursions. They said the details of fence design and of the coniferous vegetation to mitigate noise/light pollution would occur at a later stage. We plan to comment later on this. We also noted the emergency road to Bartlett Boulevard that could be an access point for pedestrians and pets but NVCA said this was a municipal matter.

Further comments will be forthcoming from NVCA on Functional Servicing and Stormwater Management. We will communicate our further concerns to the Town in our efforts to prevent harm to the Silver Creek Wetlands.

By Don Kerr, Member of the Board of Directors and Watershed Action Group