Meet Kathleen Knoll, New Member of Board of Directors

Kathleen Knoll has roots extending back six generations to the mid-1800s in Collingwood and the Georgian Triangle. She has strong family connections to the landscape and to the marine/shipbuilding culture of this area.  Her grandfather Arnold Knoll worked as an electrician for 25 years at the Collingwood Shipyards and her grandfather Earl McWhirter sailed the Great Lakes as a ship’s Captain. 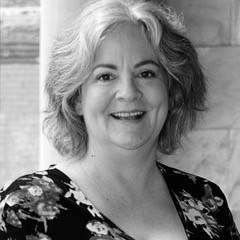 She spent her formative years in Collingwood and Stayner. Eventually her family moved to Barrie where she completed secondary school at Barrie Central Collegiate. She lived in Toronto to study nursing at George Brown College and Ryerson. She and her husband, Gordon, moved to Collingwood in 1994 and in 1999, purchased her late grandparent’s home. Professionally she has worked at the Collingwood Sport Medicine Clinic, Georgian Hills Vineyards and Side Launch Brewery in administrative and retail positions. Last summer she was crew on board the Huronic at Collingwood Charters. She currently works part-time in downtown Collingwood at the Good Health Mart.

Her husband, Gordon, is a retired Pastry Chef. They met in Toronto when they both worked at The Four Season’s Hotel in Yorkville.  They owned a small wholesale bakery, Chocolate Lily, in Collingwood from 1995 to 2011 supplying cakes and pastries to local restaurants and cafes.   In March they celebrated their 25th wedding anniversary.  Gordon has a studio and is enjoying retirement creating landscape and abstract painting.

Kathleen’s experiences as a volunteer include several years at the Georgian Triangle Humane Society in a variety of roles. While volunteering there she adopted two cats, Zelda and Monk, and their Cocker Spaniel Sami.  She also volunteered with Therapeutic Paws of Canada with Sami who was certified as a therapy dog visiting at Sunset Manor. They added Lucy, another senior cat, to their family two years ago.

She has always had an interest in local municipal politics and 2018 ran for Town of Collingwood council in an unsuccessful bid. It was an invaluable learning experience, she says.

She joined the Blue Mountain Watershed Trust because she believes in making an active contribution to her community and is concerned about the rate of growth and development in this area.  She was happy to be asked to join the Board of Director’s last year and enjoys working with the dedicated individuals who strive to ensure the sustainability of the precious wetlands in the area surrounding Georgian Bay. She says climate change is the most challenging issue of our lifetime. “It is imperative that we make a conscious and active effort to protect the environment and make the world a better place for future generations.”