On October 6, 2015, Grey County’s Planning and Development Committee passed a resolution recommending ‘that the Niagara Escarpment Commission be dissolved given the existence of professional planning in county, regional and municipal governments.’ The vote was 13 to 4. The original purpose of the meeting was to discuss two NEC discussion papers associated with the 2015 Co-ordinated Review – ‘Additions to the Niagara Escarpment Area’, and ‘Land Use Designation Criteria Mapping, County of Grey.’ The meeting was supposed to focus on the testimony of Randy Scherzer, Grey’s Director of Planning, who had prepared a defense of Grey County land rights. 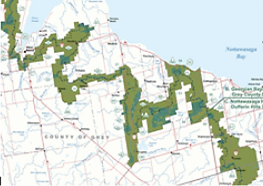 However, the majority of Grey County councillors were not interested in dialogue with the Niagara Escarpment Commission. For example, Gail Ardiel, Deputy Mayor of The Blue Mountains, claimed that “the Commission itself should be gone… and the NEC Act should be managed by each municipality— since the old system meant too much overlap and cost for the taxpayers.” Kevin Eccles, Grey County Warden, expressed similar views: “Municipalities with amalgamation and growth …have the capacity to implement…the provincial regulations that we work under…we don’t need two or three bodies to review that…” And for Arlene Wright, Deputy Mayor of Owen Sound, the County needed to take a strong stand against sinister outside forces: “Should we have Toronto controlling us with our land issues up here along with everything else they have control over?” The mayor of The Blue Mountains, John McKean, voted against the resolution.

Clearly the recommendation of the two NEC discussion papers on expanding the Niagara Escarpment Plan Area represents a challenge for Grey County. The “Additions” study recommends that 44,196 hectares should be shifted from municipalities that border on the NEP Area, both to rectify past mistakes, and to take advantage of the provincial goal of expanding the Greenbelt region. Lands recommended for inclusion in the NEP meet criteria such as Escarpment brow, toe, slope; a significant Escarpment-related landform; part of a Provincial Park, nature preserve, or significant woodland, wetland, headwaters or waterfall; and so on.

Under the proposed scheme, 32,559 hectares of Escarpment land would be shifted from the control of Grey County into the NEP Area. Not surprisingly, there has been a hostile reaction from some of the Grey County councillors especially over the fact that 73.7 percent of the total amount of land proposed for inclusion in the NEC plan comes from their region. In contrast, there are only 6.9 hectares proposed for the Niagara Region; 765 and 4129 hectares for Bruce and Simcoe counties respectively; and zero land from Halton, Peel and the City of Hamilton.

To be fair, these are recommendations for discussion, not policy directives. And while all discussion papers for the 2015 Co-ordinated Review are extensively researched and thoroughly reviewed by the Commission, only a few select briefs are forwarded to the Minister of Natural Resources and Forestry or related ministries. More important, it is the MNR&F (or Cabinet) that ultimately decides whether to accept them, or reject them.

1) many Escarpment lands in the southern regions have already been incorporated into the Greenbelt system; 2) mapping inaccuracies of Escarpment lands was most pronounced in Grey County; 3) and the natural heritage features aspect of the NEP Designation Criteria has a greater impact on Grey County, since little has been done in this field by local governments.

Another Perspective on the Controversy

The Scherzer report demonstrates that Grey County planners are more than capable of negotiating effectively with the Niagara Escarpment Commission both in decreasing the total amount of land proposed for transfer and reducing the percentage of lands categorized as Escarpment Natural and Escarpment Protected. An alternative approach, however, would be to consider the growing popularity of ecotourism throughout Grey County, particularly in the Bruce Peninsula and in The Blue Mountains.

Ecotourism provides additional reasons to support the movement of lands into the more protected categories, an approach favoured by the Niagara Escarpment Parks and Open Space System. Under NEPOSS, with its 163 parks and special Nodal Parks, there are unique opportunities “for outdoor education and recreation… on public land for discovery and enjoyment by Ontario’s residents and visitors.” Equally important is the need to appreciate that Grey County contains more than 85 percent of the 7,335 hectares (4.26 % of the NEP) designated as Escarpment Recreational, the least well-protected category. This includes not only the five commercial ski operations in The Blue Mountains, but the expansion of four season recreational activities throughout the County. Significantly, the NEC, local governments and major recreational companies have successfully worked together to establish profitable operations such as the Blue Mountain Resort recreational rope and zip-line at its ski site, while still ensuring that there was no unnecessary encroachments on the slope of the Escarpment.

Finally, for those who are concerned about expanding wind farm operations in Grey County, they should be pleased to learn that this activity cannot take place on lands categorized Escarpment Natural and Escarpment Protected.

What are the Ramifications of This Anti-NEC Debate?

According to my Watershed Trust colleague Don Kerr, the NEC dissolution issue “is a tempest in a tea-pot…[since) the Ontario government would have no interest in dissolving the NEC or to pass the responsibility for the NEP to the municipalities.”

On the other hand, even if, as likely, Queen’s Park rejects this demand for NEC dissolution, there could be negative side effects. Will this assault on the image of the Commission undermine important environmental policy that the NEC has championed, notably the curtailment of new aggregate mining activities in the NEP, the expansion of the NEPOSS system, and enhanced protection for endangered species in the NEP? If the Grey County strategy of institutional blackmail were successful in forcing the MNR&F to repudiate the NEC discussion papers, would other powerful groups such as the aggregate industry be emboldened to adopt similar tactics?

While the Blue Mountain Watershed Trust is very concerned about these developments, there have also been a number of positive developments. One of these was the discussion that occurred at the 21 October meeting of The Blue Mountains Council when Councillor Michael Seguin raised two key questions about the NEC dissolution motion: Did the Grey County Council have the authority to pass such a contentious issue without prior consultation with local governments? Why has there been no public debate about this matter? Hopefully, this signals the beginning of a more rational and informed discussion about an institution that has protected the Niagara Escarpment for the past thirty years.