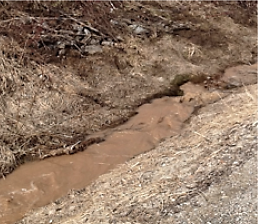 Above: Scenic Caves Road ditch during 2015 spring freshet before rip rap was put in place.

Write up and photographs by George Powell

Our Spring/Summer 2015 newsletter provided an article emphasizing the impact that increasingly turbid runoff is having on our streams and showed photographs of erosion and high turbidity in both Townline Creek and Silver Creek. We asked our members who belong to local ski clubs to bring the above concerns to the attention of their ski hill managers. This spring we met with staff of The Blue Mountains and Blue Mountain Resorts to discuss the importance of sediment and erosion control. 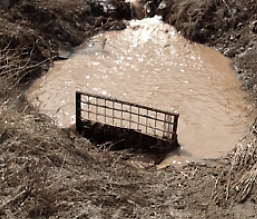 It is clear from more than seven years of monitoring that development pressures and construction activities are degrading our watershed and Georgian Bay. We need awareness of this issue and an action plan to control impacts to acceptable limits.

Encouraging to us are the significant improvements made by Grey County, most noticeably in the rehabilitation of Scenic Caves Road (Cty. Rd. 119). The ditches on both sides of the road in the steeper sections have been rip rapped and small dams provided across the newly armoured ditches to slow down the intensity of runoff.

Photo above was after rip rap was in place and after a significant rainfall event the previous day (60 mm of rain). Runoff was noticeably less turbid and the impact on Silver Creek certainly far less.

on Osler Bluff Road and has kept the protection of staked straw bales and silt curtains in place while vegetation is being established in the ditches. 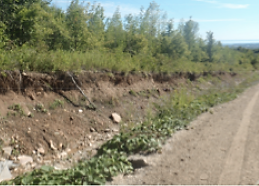 Ski hills, however, continue as a major contributor of turbidity to the watershed. When slippage events take place as noted in the above photo, slope stabilization is needed as soon as possible after the event. Downhill of the slippages erosion protection using silt curtains and staked straw bales will help to lessen the impact on the watershed.

As well, work needs to be done on erosion control on some of the steeper sections of roads in the area. The ditch 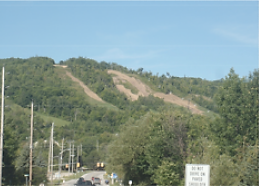 shown above is on 12th concession and discharges into Silver Creek. It presently is carrying a significant load of suspended solids to the Bay during major rainfall events. The impact is damaging to fish spawning areas not only in the stream itself, a major spawning stream for rainbow trout and Chinook Salmon, but also off shore in West Black Bass Bay where small mouth bass habitat is affected. There is a similar concern in Clearview Township whereroadwork is proposed to make Side Rd. 26/27 an all weather road. This road goes straight up the Escarpment and is steep. It will need erosion control. This concern has been documented and sent to Clearview Township and the NEC.