By Donald Avery, (from Avery’s two reports submitted to The Blue Mountains Council) 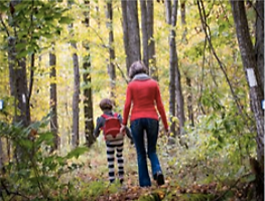 It should be emphasized that the Loree Forest is
an integral part of the Niagara Escarpment Park
and Open Space System (NEPOSS), which was recently
described by the Ontario Land Use Planning Review process (the Crombie Panel) as an “example of successful land protection…” Nor should it be forgotten that the 339-­‐hectare Loree Park was recently named after Len Gertler, a tribute to an outstanding environmentalist involved with the 1985 establishment of the Niagara Escarpment Planning and Development Act.

Several members of the Watershed Trust, Don Avery, Don Kerr and Rosemary Gosselin, have attended meetings in June and October at The Blue Mountains council. They have also made submissions and sent letters to express the Watershed Trust’s concern about motorized vehicles being allowed in the Loree Forest. The company, Xtreme Adventures, with the approval of the Town and landowners, has been driving military-type Hummers along the single track road (an un-opened right-of- way) that is the access road for hikers, cross country skiers and snowshoers into the Loree Forest. Until recently, this road has been used for emergency access only and used rarely.

We are so fortunate to have this escarpment in our backyard. Its ranking as a UNESCO World Biosphere Reserve requires continual protection of its component parks—including the Loree Forest which has been categorized as being a Natural Environment Class Park, one of the highest levels of protection and, as such, it is expected that there would never be motorized vehicles here.

Ros Rossetti, President of the Beaver Valley Bruce Trail Club, who also made a presentation before council, used graphic photographs that showed deep ruts and other ecological damage from vehicles in many areas of Loree Forest. She explained that members of the Bruce Trail Association and other recreational groups that use the Loree extensively on a four-season basis are concerned that these motorized vehicles represent both a safety hazard and a source of unnecessary noise.

Under the Niagara Escarpment Plan, the NEC has the authority to enforce the regulation that “off-road, power driven, recreational vehicles are not permitted in Escarpment Parks.” In June, the NEC’s Judy Rhodes-Munk expressed concern over motor vehicle use in Loree Park because of “environmental damage and the safety of other users of this publicly owned land.”

One of the major arguments advanced by Xtreme Adventures is that they are an important part of the Georgian Triangle ecotourism industry. This is a preposterous claim. In fact, this kind of operation is the very antithesis of ecotourism, which has been defined by the Niagara Escarpment Commission as “a plethora of outdoor activities for anyone seeking to enjoy the unspoiled natural surroundings and partake in physical activities.”

Instead of appreciating the unique aspects of the Loree Forest park, the company appears to regard it as just another publicly owned property which can be exploited at much lower cost than an alternative private sector based operation. Significantly, one of the company representatives acknowledged that Xtreme Adventures had already experienced private sector objections to its business practices, and consequently had been forced to change locations.

But the most contentious aspect of the company’s claims are that a significant number of Xtreme Adventures clients are people “with mobility issues from toddlers to seniors, quadriplegics, paraplegics, as well as those with mental and other physical disabilities.”

Unfortunately, only limited evidence was provided to support this line of argument. Even more important, as Don Kerr has pointed out, “There are many other opportunities for people with mobility issues to enjoy the natural world. A Hummer trip does not allow true enjoyment of the botany and birdlife, in fact it disrupts these features.”

The Blue Mountain Watershed Trust is hopeful that, at their 16 November meeting, The Blue Mountains council will adopt appropriate measures to exclude motorized vehicles from the Len Gertler Memorial Loree Forest Park. In our opinion, allowing Xtreme Adventures to continue its operation would not only result in further damage to this ecologically sensitive environment, but would also encourage even less responsible drivers to continue their destructive practices.