Members of the Trust are well aware of the seriousness of global warming and its negative effects on weather extremes of flooding, drought, forest fires, loss of coral reefs and biodiversity, forced migrations (Syria), disruptions of northern peoples, etc.; and it is going to get worse.

Unfortunately, many people believe we are actually making some progress when, in fact, the situation is not getting any better. Carbon dioxide is stuck at around 402 ppm in the atmosphere (we need 350) and at this level the oceans are getting more acidic and the global temperature is still rising. You can track carbon dioxide on the website Keeling Curve and track Canada’s GHG production on the website Greenhouse Gas emissions Canada. Our GHG production has been stuck at around 700 to 720 megatonnes for several years with 716 reported for 2017, a slight increase from 2016. We have not even updated the old inadequate Harper government target. The federal carbon tax will help but is unlikely to be sufficient. Things will have to become much worse before the economic and business elites will permit moving faster due to their belief that GDP growth solves everything. [I am reading an excellent book by Peter Victor, Managing without Growth (2019) which, among many things, notes that economic growth must be slower by design for the benefit of the planet.]

It seems clear that more drastic measures will be required. In a similar emergency like WWII we had gasoline and aviation fuel rationing as well as beef rationing. We may also need limits on home heating and air conditioning temperatures and reduced speed limits as in the oil crisis of the 1970s. We can call upon those earlier experiences for fossil fuel reduction when decision-makers begin to feel threatened with an emergency that they can believe is as serious as a World War. Retrofitting of building insulation and increased public transit should be included but perhaps cannot be done quickly enough. 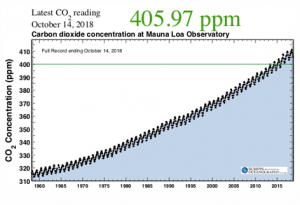 Some persons point out that sufficient change will not occur until the neo-liberal approach to governing can be overthrown. The belief in the unfettered free market and continuous GDP growth is imbedded in western democracies. There is no indication that existing political parties can overcome these forces of economic liberalism. Unfortunately, the business elite has too much influence. The Guardian Weekly reports that the biggest oil and gas companies are still lobbying to delay efforts to reduce fossil fuel usage. In Canada, they feel obliged to slow the measures that might affect their perceived competitiveness, especially with the USA, in the interest of short-term profits. A much greater level of damage must be experienced to get us to do what is needed. Maybe we can take inspiration from Greta Thunberg the Swedish teen, and other young people who have taken up the battle.

The irony is that, as humankind discovered nature’s gifts, the gift of ancient sequestered carbon in fossil fuels has become a probable source of catastrophic damage.

By Don Kerr, Member of WT Board and Watershed Action Group