We Helped Save Woodlots in Thornbury 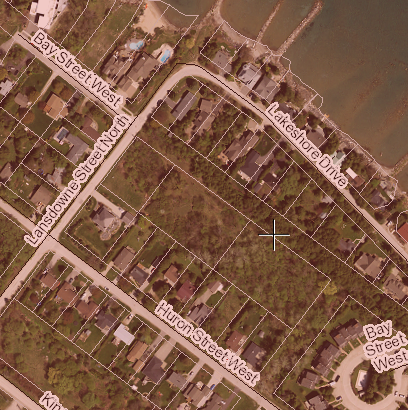 Since this photo was taken, the Abbotts site has been completely grubbed to the lot lines.

We Helped Save Woodlots in Thornbury

By George Powell, WAG member, and Blanka Guyatt, Board and WAG member

The residents of west Thornbury formed a group, the Harbour West Concerned Residents Group, to oppose a development in their neighbourhood. At the recommendation of Andrew Sorensen of Grey Sauble Conservation Authority they contacted the Blue Mountain Watershed Trust.

The proposed development, still at the design stage, involves a small parcel of land, 2.5 acres, owned by the Abbotts family and formerly known as the Maple Leaf Gravel Pit that operated between 1925 and 1965. It is not clear what is in the gravel pit now but after the gravel deposit had been excavated it became a pond that fluctuated with the ground water elevation. The closure of the pit needs to be investigated to determine what fill is there. Oil drums and car wrecks were seen being put there by residents.

A closed east west road allowance abuts the north side of the site and is the extension of Bay Street West. To the east the site borders on a north south closed road allowance, the extension of Victoria Street South. The developer wanted to purchase the closed road allowances to develop a combined site of about 4.2 acres. The original proposal for development of the Abbotts site was for 14 single-family residences on lots 35, 36, 37, 38, 39, more or less in keeping with the density of the existing neighborhood. With the addition of the road allowances the developer would increase the density to as many as 40 units. This high density worried the Harbor West Concerned Residents Group.

The road allowances form a cedar woodland and a small watercourse runs along the north side of the road allowance in a westerly direction to Lansdowne Street South, where it crosses the road and then flows north to Nottawasaga Bay.

Blanka Guyatt and George Powell met with the residents then arranged a meeting with the Town of Blue Mountain’s Mayor and Director of Planning to discuss this proposed development. They indicated that no official applications had been submitted as yet and only exploratory meetings have been held. There has been no contact with the conservation authorities.

The town investigated the issue and on September 11, 2017, the Mayor, John McKeen, announced that the unfinished roads will not be sold and will stay intact. The cedar woodlot may be too small to be considered a significant woodlot, but it represents a significant green space in the middle of the Town.