We Were One of Many Sponsors of The Heart of Turtle Island: The Niagara Escarpment 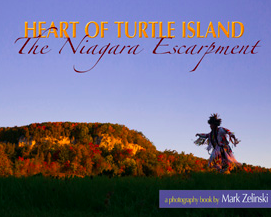 We Were One of Many Sponsors of The Heart of Turtle Island: The Niagara Escarpment

By Blanka Guyatt, WT Board and WAG member

The Heart of Turtle Island is a new book about the Niagara escarpment by photographer and artist Mark Zelinski. His diverse career as a professional photographer has taken him across 80 countries, with clients ranging from The National Film Board of Canada to Panasonic. He is also a publisher, writer, painter, filmmaker and winner of the Canadian Governor General’s Medal.

For this book about the Escarpment, he spent five years shooting more than a quarter of a million photos from Niagara to Tobermory. He edited the number of photographs for the book to 400.

The book celebrates the environmental treasures of the Escarpment, the diverse indigenous and settler communities along its length and its geological and cultural significance.

Zelinski visited the same places over and over to get the best weather and the right light. “To get a Jefferson salamander photo I had to go out with a flashlight on my head in the middle of the night, for three rainy, freezing nights. You only have a two-hour window when they are out of the pond and that is it.”

Another challenge was dealing with crowds of people at various locations such as Webster’s Falls. “A lot of these places have become very popular and they are threatened by overexposure,” he said.