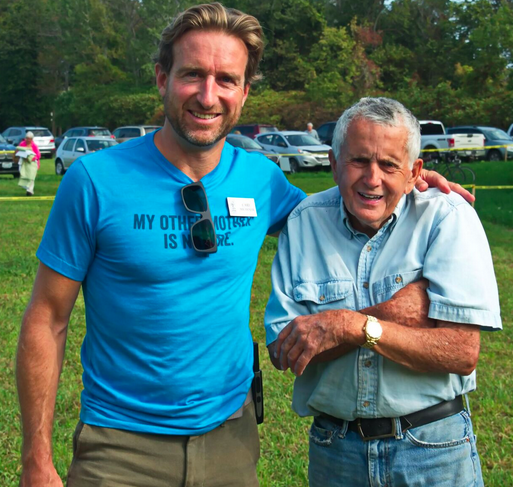 Event organizer, Carl Michener, left with Sonny Foley who not only provided the property but also helped set up tables and booths and chairs

For the second year running, the Watershed Trust put on See the Salmon Run, our main yearly public outreach event, on September 23rd. We had a great turnout at the Foley property (at the intersection of Osler Bluff Road and 6th Street) under a scorching sun, with approximately double last year’s attendance—about 550 people.

A walk of discovery

The idea behind the event was to educate people of all ages about riparian conservation, the spawning habits of Chinook salmon and the value of healthy watercourses in general. The centrepiece of the event was a self-guided nature hike through the woods along Silver Creek. Conservation experts from four organizations were stationed at points along the creek to answer questions and impart detailed information to one and all. A big thank you to participating organizations: 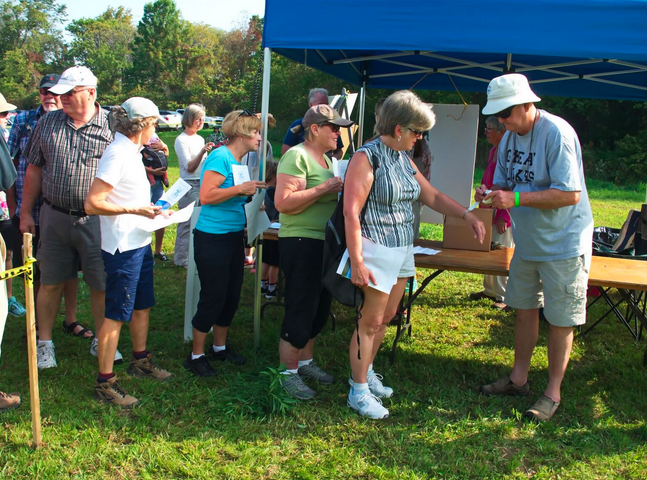 People arriving paid $10 for an admission bracelet and could buy lunch and beer tickets at this booth. George Powell, far right, member of the Watershed Trust’s Watershed Action Group, helps fasten a bracelet. 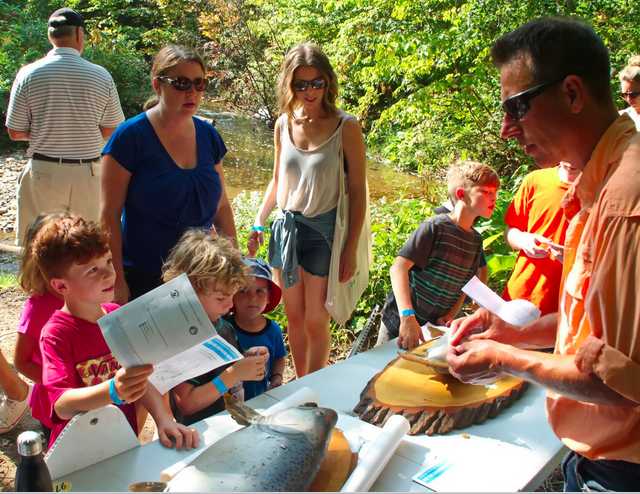 As people walked, they could stop and learn. Children presented their ‘Salmon Passports’ and collected stickers for their books at each station. 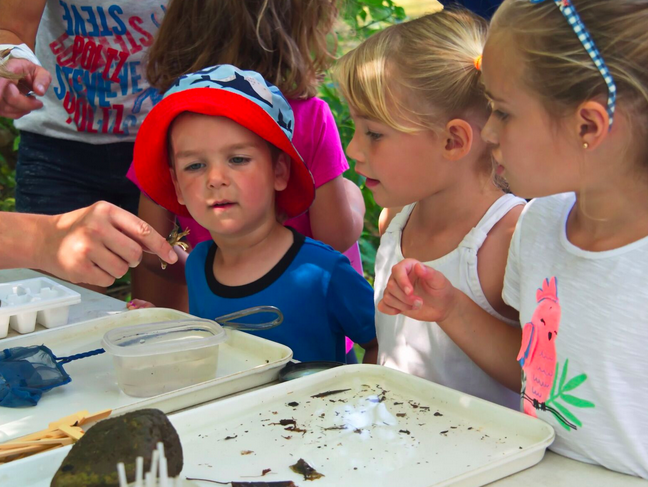 Captain Tony R. Degasperis of Georgian Bay Anglers had fish models that children could handle. Each child was given a passport and collected six stickers, each representing a stage in the salmon’s lifecycle.
Even without the salmon, there were many things to learn about aquatic life. Children scooped water from the stream and analyzed it with experts from Ontario Streams.

In addition to the Salmon Passports, which kids completed with a final sticker and crayons back at the lunch tent, children enjoyed Elephant Thoughts’ huge inflatable Chinook salmon, turtle and Gut Hut, giant inflatable balls to get inside and roll around in called zorbs, and interactive games and crafts courtesy of the Nottawasaga Valley Conservation Authority’s kids brigade. No child left the event bored! 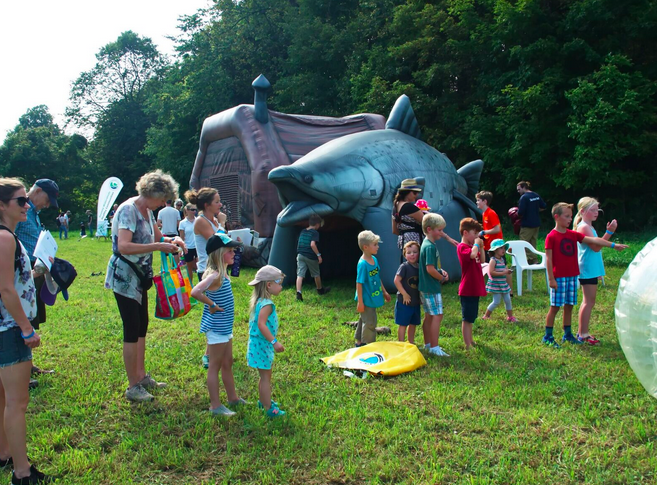 Children could roll in giant balls called zorbs, play in the giant salmon and bouncy castle, colour at the tables and learn about wetlands through interactive games. 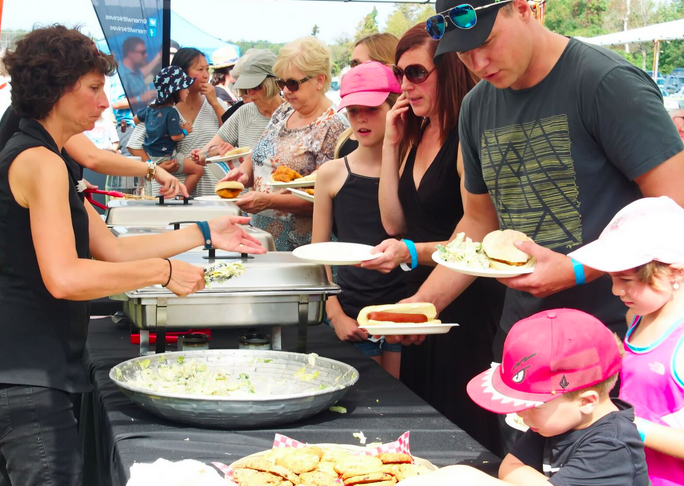 Men with Knives put on a great lunch, as they did the previous year, with Kolapore Springs Fish Hatchery trout on a bun, a FREE kids’ lunch and local brews from the Collingwood Brewery.

Unfortunately, Mother Nature did not comply with an influx of sinuous swimmers. The only Chinook salmon that anyone saw were the stuffed specimens that Capt. Tony Degasperis of the Georgian Bay Anglers brought along to display. The salmon spawn in the cool damp weather of late September but this day was over 30 degrees C and although the salmon had been running earlier in the week, on September 23, they were resting in deep pools in other parts of the stream. The hot, dry weather limited water flow in Silver Creek, and a large beaver dam at the mouth of the creek exacerbated the situation. Still, feedback was excellent.

You made it happen

A big thank you to all who volunteered—we could not have done it without you! Volunteers included members of the Watershed Trust Board, the Watershed Action Group and others who came out to help for the day, earning themselves a year’s membership in the Watershed Trust. See you all next fall! 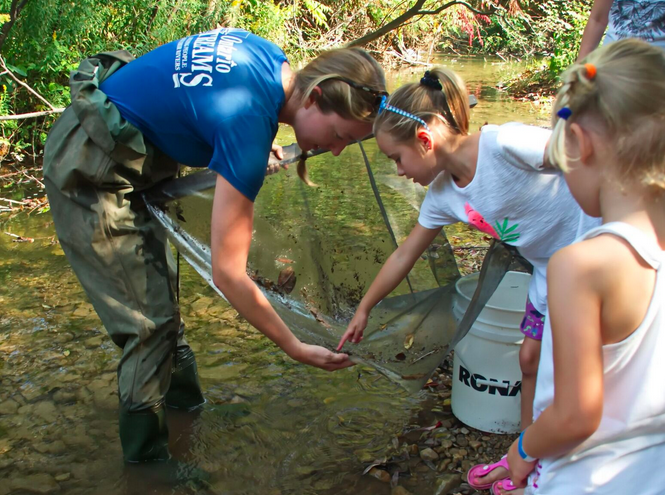 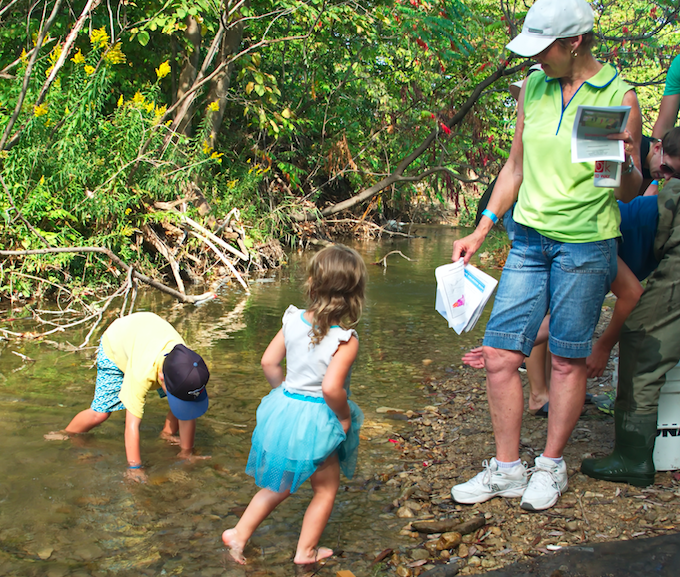 Rebecca Ferguson of the Grey Sauble Conservation Authority points out nymphs and other benthic invertebrates scooped up from the Creek.
It was a perfect day for cooling off in the Silver Creek