Last fall we received a phone call from Gail Bascombe, a condominium owner at Rupert’s Landing who was concerned with the rapid spread of Phragmites across the waterfront, to the extent that recreational activities in White’s Bay were being seriously impacted. The result was a meeting last fall that brought together stakeholders to discuss how a program could be initiated to try and control the invasion. Considerable experience was available from the NVCA, Georgian Bay Forever and Lighthouse Point Condominium owners who had cleared a stretch of their beach of Phragmites last year. They explained what worked, what didn’t work, when and how it should be cut. We provided our article on “Invasive Phragmites” and NVCA’s David Featherstone and David Sweetnam of Georgian Bay Forever obtained funding from Environment Canada’s Lake Simcoe Southeastern Georgian Bay Clean-Up Fund, RBC Blue Water Fund and others. 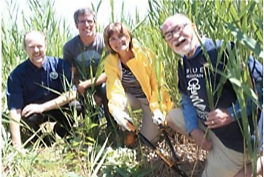 NVCA’s Brittany Hope, a water-monitoring technician, was the program point person and managed the work in concert with Georgian Bay Forever, the Town of Collingwood, local condominium boards and Watershed Trust. Thus began the tough job of reducing the impact of Phragmites along the Collingwood shoreline.

Wendy Martin, Town’s Park Department Director provided staff to pick up and transport the cut Phragmites to the Simcoe County’s compost facility where it was composted at high temperatures to destroy the seeds.

One of the first phases of the project was to map the current extent of Phragmites. Using GPS, the Collingwood shoreline was surveyed from Sunset Point Park to White’s Bay and mapping prepared. Several meetings were held to make stakeholders aware of the extent and the method to be used to “Fight the Phrag!“ 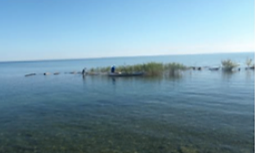 Stand of Phragmites off shore at Sunset Point Park

The date of Saturday August 8 was set for the first formal large-scale cutting. There was a good turnout from the Condominium Associations to help to cut the Phragmites on their property.

NVCA provided us with gloves, pruning shears (not that effective for the larger stands); long-handled garden shears (effective but not as good as the long-handled gas powered pruning shears); tarps for dragging the Phragmites to the drop-off points; and a canoe to transport the off shore Phragmites cuttings to shore for off-loading onto tarps and dragging to the drop off points. The cut stem trunks are quite sharp and heavy-soled shoes are needed. 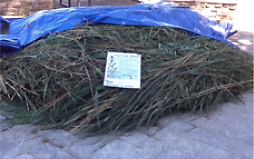 On a cloudy but warm and calm Saturday morning we started cutting at the east end of Sunset Point Park. Volunteers included my Sunset Point neighbours the Cannings and Woolnoughs, the Donavans from Ottawa, three Collingwood Collegiate Institute students, Miriam Houghton, Melissa Dosne and Shayna Donovan, of the CCI “Earthlink” group and my wife Heather.

We cut the Phragmites as close to the ground as possible and below the water surface in the flooded areas and then placed the Phragmites on a tarp and dragged it to the pick up points.

We were tired by noon after four hours of cutting and dragging and called it a day. On Sunday morning my neighbours Al and Lois Woolnough volunteered to help get rid of the last remaining stand of Phragmites in the park opposite the lookout.

Large stands of Phragmites will continue to grow and spread. We need to make plans for next year’s cutting effort. In the Harbour, in Silver Creek Wetland, in Black Ash and Townline Creeks there are stands that will need to be taken out. The areas cut this year will need re- cutting, as it takes several years to make an impact. We need public awareness of the issue. We need a champion to spearhead the project. We require funding. We need volunteers. High- school students would be a good recruitment resource, as they need 40 hours of community- based volunteer time to graduate.