On August 12, This Summer, the Crews Were Out Working 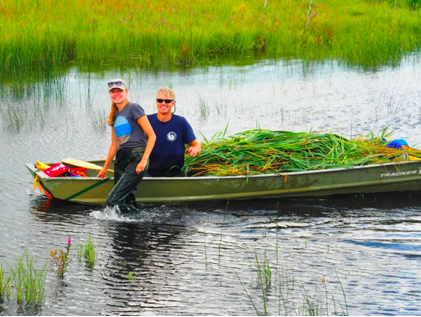 Aquatic biologist Sara Finnimore and Fred Dobbs both of the NVCA led the cut in the Hen and Chickens area, public lands on the western side of the Harbour. Fifity volunteers helped out in this area.

This is the third year Watershed Trust has attacked invasive Phragmites along the Collingwood shoreline. Again this year we targeted the Eastern Fen, the wetland west of Sunset Point Park and east of Heritage Drive. There was re-growth in some areas previously cut in the Eastern Fen but one large stand in the middle of the wetland cut in 2016 was gone.

NVCA hired Sara Finnimore, an aquatic biologist to work on the cutting along with NVCA staffers Sarah Campbell and Fred Dobbs. Blanka Guyatt and George Powell were the Watershed Trust leaders and David Sweetnam, the GBF leader. Deb Doherty was the Collingwood Council member who helped cut on August 12th and was our contact with the Town of Collingwood. Wendy Martin of Parks was responsible for the pick-up by the Town.

Phragmites, with its long roots and runners, out-competes our native plants. It is a significant threat to our coastal wetlands and, if not stopped, will eventually constitute a dense monoculture seriously impacting the native vegetation. 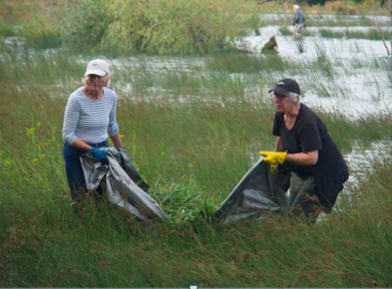 Bonnie Gibson, left, and Heather Powell lug the tarps loaded with cuttings from knee deep water to the drop off point on Heather Pathway for pick up by the town of Collingwood. At the landfill the cuttings will be buried. Composting is not permitted for fear of spreading the Phragmites seed.

Wildlife is impacted too as passage through the stands is very difficult for amphibians and reptiles and they are often found dead in the more dense stands which can have 200 stems per square metre. The water level this year was approximately 150mm higher than last year and cutting in knee-deep water was required in some areas.

Unfortunately we could not get permission to cut the stands on the privately owned water-lots behind the Provincial Courthouse and Sobey’s in time for the August 12th cutting and had to confine our cut to the offshore stand in the wetland and the Minnesota Street road easement. 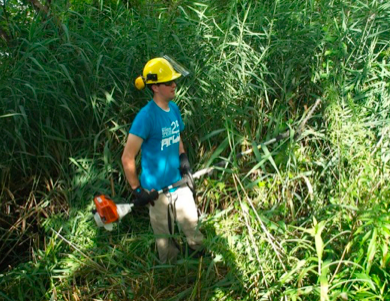 NVCA’s Dan Switzer uses a motorized cutter. Stands in some places were over 3 metres tall

Eric Willis, (WT board member) and his wife and son cut two areas in the ditches on Osler Bluff Road on August 11, 2017. He found a much bigger stand on the extension of Osler Bluff north of Mountain Rd. Where they cleared is not close to Silver Creek, but the ditches in the area drain north either to Silver or Townline Creek where there are now significant stands.

Cutting Phrag in the Blue Mountains 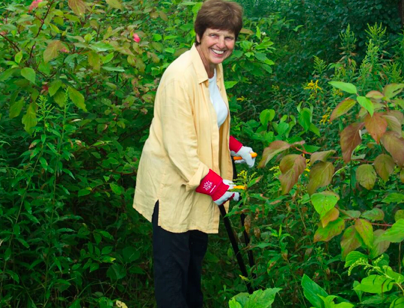 Blanka Guyatt, above, uses long handled grass shears, that are the best tools where Phragmites has to be cut by hand. Long sleeve shirts and pants and work gloves prevent the Phragmites from cutting the skin. Hiking boots help in the uneven, rocky, muddy terrain.

At Peasemarsh Beach in the Town of the Blue Mountains, Rebecca Ferguson and John Bittorf of Grey Sauble Conservation Authority (GSCA) with a crew of 10 people carried out the first cut of Phragmites done in that municipality. What Water Wants, (The Beaver River Watershed Initiative) contributed volunteers and purchased two motorized cutters for GSCA. Stella Presthus of the Blue Mountain Watershed Trust Foundation was our volunteer. The Phragmites was cut and piled but not removed. The cut area is about 1.5 acres and took the crew 40 hours to cut and pile.

Where Do We Go From Here?

There needs to be continued monitoring. Large stands of Phragmites exist both in private and public lands and will continue to grow and spread. Efforts need to be made to prioritize and plan next year’s cutting effort, which for certain will be necessary. 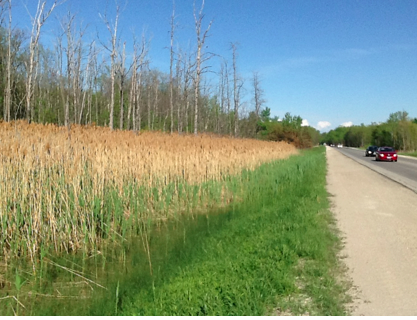 The photo to the left shows the very large stand of Phragmites located on the north side of Highway 26, east and west of Silver Creek. It is on both private and public lands. In the past the Ministry of Transportation (MTO) has applied a herbicide in the ditches and while MTO is allowed to do this, the manufacturer’s safety data sheets state for the product used, “HARMFUL to aquatic organisms. Avoid direct application to any body of water populated with fish.”

Run-off from the ditches will find its way eventually into the wetland. During the critical period in late July and August, instead of herbicides, MTO could use power cutters in areas close to wetlands and harvest the cuttings so that regrowth is reduced.

There is a large stand of Phragmites in Black Ash Creek just north of the Mountain Road Bridge. Seeds are finding their way into Collingwood Harbour and stands are now appearing in the Harbour at the mouth of the creek and in the excavations at the Shipyards.

In the Harbour, in Silver Creek Wetland, in Black Ash and Townline Creeks there are stands that will need to be taken out and those areas, cut this year, will need to be monitored to see the success of this year’s cutting program. Unless a safe herbicide can be found, re-cutting will be necessary and it will take several years to make an impact.

We need higher level of public awareness of the issue. We need NVCA and GSCA to continue to champion and spearhead this activity and we need to find funding for them to do this,

We need volunteers to help out.

We had publicity this year in the Connection, Enterprise Bulletin, and the Peak FM. For whatever reason turnout of volunteers was not as high as we hoped for and turnout of organizations representing the Harbour water-users was very poor. The date of the cut conflicted with the Harbour Waterfront Festival and this is perhaps the reason that we did not have volunteers from the Harbour water-users. They did notify their membership.

In discussions with Councillor Doherty, if the Town’s Weed Bylaw was amended to include Phragmites as a noxious weed, private property owners could be made to cut Phragmites on their property and this bylaw is something the Town is currently discussing.

On behalf of the Blue Mountain Watershed Trust Foundation, we thank all who volunteered for their efforts in this year’s “Fight the Phrag “ program.