What a Party! Our 20th Anniversary was a Great Success!

What a Party! Our 20th Anniversary was a Great Success!

All anniversary photos by Duncan Bristow 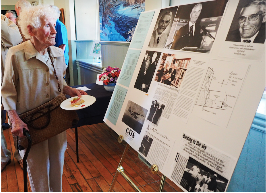 Above, Irene Gibson, mother of Board member Lora
Gibson, reads the Terk Bayly poster in the Craigleith community hall. Coffee time, the silent auction and lunch were also held in the hall.

On September 26th, the Craigleith Community Centre and its lawns were filled with people spending the day celebrating through art, music, food, lectures and silent auction, our 20 years of working to safeguard our Blue Mountain watershed ecosystem.

Meet and greet began with coffee inside the old schoolhouse while outside, where people were milling under our tent, Grade 11 student Hanna Johannesson played the flute. Terry Burns, Poet laureate of Owen Sound, opened the morning events by reciting her poem, CREDO. 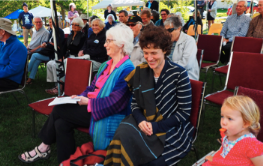 Three generations of the Bayley Family

Retired history professor Don Avery, member of the Board of Directors and of our Watershed Action Group, was the first speaker. He set our beginnings in context, two decades ago when so many advances in environmental protection were legislated. He told the stories of our founders Terk Bayly and Greta McGillivray. He outlined our many accomplishments and then introduced the panel of speakers.

Board member Lora Gibson gave a talk ‘Art and the Changing Environment’ noting the unusual art that was produced in 1816, the year without a summer. The drastic climate change that continued for several years was due to the eruption of the Mount Tambora volcano in Indonesia. This was the year Shelley wrote Frankenstein and Lord Byron dreamed up a story that Polideri turned into Count Dracula. 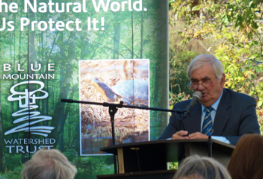 Special guest, Don Scott, Chair of the Niagara
Escarpment Commission, above, spoke to the
audience about the many ways that the NEC and the Trust have worked together and the importance of our continuing mutual support.

The morning session ended with musician Krista Currie singing Sarah Harmer’s Escarpment Blues, the quintessential ‘Save the Escarpment’ Song. Board member Blanka Guyatt organized a delicious sandwich lunch and then we cut the cake! Happy Birthday Watershed Trust! There were games and art activities for children and afternoon lectures held in the Depot. 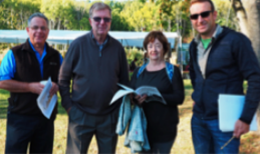 Thanks to our Silent Auction Donors: Robert Bateman, The Beaver River Watershed Initiative,