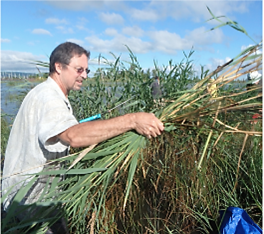 This is the second year of attacking Phragmites along the Collingwood shoreline. This year we targeted the wetlands west of Sunset Point Park and east of Heritage Drive where Phragmites is making inroads into this unique and rare coastal wetland.

Georgian Bay Forever with the NVCA and Watershed Trust organized a workshop this spring to familiarize environmental organizations and the public about the of impact Phragmites on our watershed. Mayor Cooper who sits on the “Great Lakes and St. Lawrence Cities Initiative” spoke on the overall concern of the impact of invasive species in the Great Lakes and asked for our support in the fight.

Short-term funding has been obtained from Environment Canada’s Lake Simcoe/Southern Georgian Bay Clean Up Fund and the Royal Bank’s RBC Blue Water Fund. New funding needs to be found if we are to be successful in continuing our “Fight the Phrag” program. Nottawasaga Valley Conservation Authority (NVCA) is providing the oversight and equipment. Chelsea Deakin of NVCA is our contact person. David Featherstone, Manager of NVCA’s Water Quality Programs, and staffer Brittany Hope, provided guidance. Their leadership has been essential to the program. 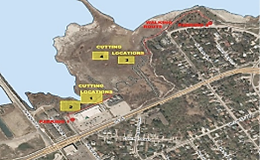 The map above shows the stands of Phragmites found to date. There are four major stands with many smaller but not yet well-established stands. Stands 3 and 4 were not in the water when this aerial photo was taken.

On August 6, 25 volunteers came out to help. By 12 p.m., cutting had been finished at the four cutting locations (the four major stands identified on the map) and the cuttings taken to drop off points where the Collingwood Parks Department picked up and transported the cuttings to the Simcoe County Compost Facility The area surrounding cutting locations 1 and 2 is on land and dragging the tarps was difficult. In areas 3 and 4 the water is knee-deep and a considerable distance from the drop off point making hauling even harder work. Walking is difficult in submerged cobbled areas and the thick mud. Where water is deeper we used canoes (and could use a zodiac inflatable) to transport the cuttings.

There are many large stands of Phragmites growing and spreading. In Collingwood Harbour, in the excavations near the Shipyards, in Silver Creek Wetland, in Black Ash and Townline Creeks there are stands that need to be taken out and those areas cut this year will need to be re-cut as it takes several years of cutting to make an impact. There is a very large stand of Phragmites located on the north side of the Highway 26 just west of Silver Creek. In past years, the Ministry of Transportation (MTO) has applied the pesticide TOUCHDOWN TOTAL®, a herbicide, in the ditches to reduce Phragmites growth and while MTO are allowed to do this, the manufacturer’s safety data sheets state, “HARMFUL to aquatic organisms. Avoid direct application to any body of water populated with fish or used for domestic purposes.” Run-off from the ditches will find its way eventually into the wetland and could be harmful to the environment. Cutting is preferable. 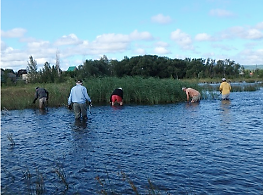 Cutting at Stand 4. The Phragmites needs to be cut as low in the water as possible so flooding of the hollow stalks takes place. On land, the stalks are cut as close to the ground as possible.

We need public awareness of the issue. More publicity would be helpful. We need NVCA to champion and continue to spearhead this activity and we need funding. We need more volunteers to help out. On behalf of the Blue Mountain Watershed Trust Foundation, we thank all who volunteered for their efforts in this year’s “Fight the Phrag” program. 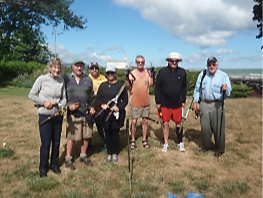 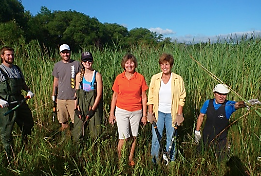 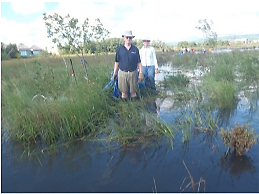