We Won the Excellence Award!

We Won the Excellence Award! 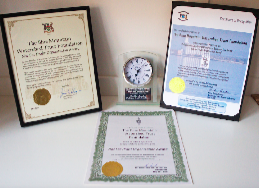 Last May 26, 2016, The Blue Mountain Watershed Trust Foundation received the Collingwood Chamber of Commerce Business Excellence Not For Profit Organization Award. The Chamber Awards Ceremony was held in the Georgian Manor in Collingwood. It was exciting to be among many Collingwood businesses singled out for this honour. The certificate of Recognition reads: This award is presented to an outstanding not-for- profit organization that has developed programs, services and/or campaigns in order to support the needs of their stakeholders and the community and successfully raised funds and/or awareness of the missions and goals of the organization. The certificate was signed by Mayor Sandra Cooper. We received congratulatory letters from federal MP, Kellie Leitch, and provincial MP, Jim Wilson. A handsome clock with inscription accompanied the certificates.