By Don Avery, member of Watershed Trust Board and WAG Committee

The controversial 1962 decision by Dufferin Aggregates Inc. to blast a large gap through the face of the Niagara Escarpment at their Milton Quarry mobilized Ontario environmentalists. Among the hundreds of protest letters sent to Queen’s Park, the following excerpt captures the sense of collective outrage associated with the ‘Dufferin Gap.’ “Each day as I pass this beautiful escarpment I have been pained by the defacement to this scenic ridge which stands out so majestically…[surely] the natural beauty of this great escarpment will be permitted to survive the encroachment of ‘progress.’”

Many of these same sentiments also inspire concerned citizens of the Blue Mountain region 50 years later who question whether the Township of Clearview should be allowed to transform a vintage Escarpment seasonal road into an arterial roadway even in the face of evidence that this will have disastrous environmental consequences and undermine the integrity of the highly prized Escarpment Natural Area.

The formal campaign to protect and preserve the Ontario Niagara Escarpment was launched by Ontario Premier John Robarts in 1967. He promised a pro-active government policy that would “ensure the continued availability of the natural beauty and recreational feature of the Escarpment for future generations.” In short order, a special study was commissioned under Leonard Gertler, a prominent geographer and planner at the University of Waterloo, “to delineate the area of the Niagara Escarpment which should be preserved as a permanent feature of the Ontario landscape and for recreational purposes…[and] identifying activities which are incompatible with its preservation for landscape and recreational purposes.” Significantly, for Gertler and associates one of major problems were roads “where the drive crosses the Escarpment face; where the drive is on the Escarpment rim; where the alignment is very close to the Bruce Trail, and where the talus slope and vegetation at the Escarpment’s foot may be disturbed.” These warnings were taken to another level by one of Gertler’s academic experts, who pointed out that unless the Ontario government devised a “a general strategic plan …[and] general code of development” it would be difficult to prevent destructive road building since “there are many right-of-ways cutting across the Escarpment where the trillium has given way to a blighted and eroded scar, quite unnecessarily.”

As a result of these concerns, in June of 1973 the Ontario legislature passed the Niagara Escarpment Planning and Development Act, which emphasized “the maintenance of the Niagara Escarpment and land in its vicinity substantially as a continuous natural environment, and to ensure only such development occurs as is compatible with that natural environment.” Not surprisingly, since then environmentalists have used these broad policy directives of the 1970s to prevent incompatible activity — including both arterial roads and those associated with aggregate mining — from being built within the Escarpment Natural Area on the grounds that they would cause serious environmental damage, fragment land use opportunities, and disrupt wildlife corridors.

Formalizing these principles, the Niagara Escarpment Plan (1985) provides a more comprehensive analysis of how roads could threaten the Escarpment. For example, under Permitted Uses (Section I), the document clearly states that only “Essential transportation and utility facilities” would be allowed in the Natural Escarpment Area; an exclusionary approach that is reinforced under the Development Criteria section (Part 2:15) which stipulates that “New transportation and utility facilities should avoid Escarpment Natural Areas.” In addition, there were several specific engineering/planning stipulations that required ANY ROAD “to minimize the impact on the Escarpment environment and be consistent with the objectives of this Plan.” It also insisted that “Finished slopes should be graded to 2 to 1 slope minimum and planted; [and] large cuts should be terraced to minimize surface erosion and slope failure.” 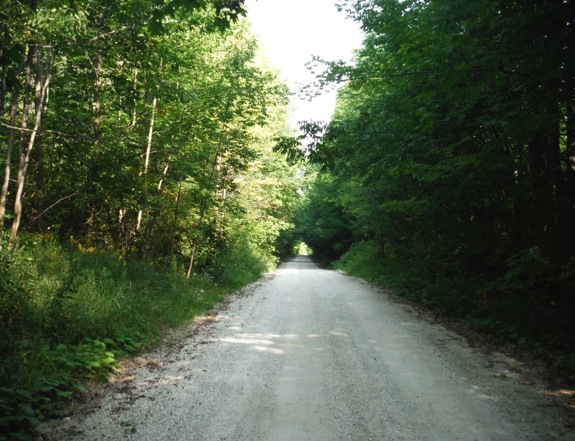 Many of these statutory measures were utilized on 19 November 2015 when the Niagara Escarpment Commission, at its Owen Sound meeting, overwhelmingly rejected the Clearview Development Permit S/T 2013-2014/9152 for the reconstruction of Side Road 26/27 There were three main reasons for this decision: “(1) The road project does not meet the test of “essential” … which requires consideration of all options in the Escarpment Natural Area. (2) Development would offend the objectives of the NEP…(3) Development would cause environmental harm, in particular to cold water streams and would damage steep escarpment slopes.”

THE TRUST SUPPORTS THE NEC

The Blue Mountain Watershed Trust strongly supports the NEC position as demonstrated by our November 2014 report on Side Road 26/27, as well as by our forceful presentation at the Owen Sound meetings, and by our determination to seek Party status at the hearings of the Environment Land Tribunal (ELT). In this endeavour we are fortunate in having Sarah Powell, an environmental lawyer with the Toronto law firm of Davies Ward Phillips & Vineberg LLP, who will provide legal services pro bono, and assist in the selection of expert witnesses. The Trust will need all of these assets when the formal ELT Hearings begin during the early fall, particularly since Clearview Township will be employing at least six expert witnesses, while its corporate ally Walker Industries Ltd. has deep pockets.

Despite this formidable opposition, we are confident that the Niagara Escarpment Commission’s decision to reject reconstruction will be sustained. First, there is a coalition of like-minded groups that have either Party or Participant status. Second, the Township of Clearview must convince the Environmental Tribunal to reverse an almost unanimous NEC decision. Third, the Clearview Development Permit application for the “reconstruction” of Side Road 26/27 remains a deeply flawed document as will be demonstrated in what follows.

One of the major Clearview arguments is that Side Road 26/27 should be regarded as having “essential transportation” dimensions, and therefore its reconstruction in the NE Natural Area should be allowed. This line of reasoning ignores many of the past and present realities of Side Road 26/27:

It has been a seasonal escarpment road since being surveyed during the late nineteenth century (closed November-April); It was originally scheduled for no maintenance funding for the period 2006-16; and its steep grades (12-14%) would discourage use by emergency ambulance service, particularly when superior transportation options are available; It was only considered for use because the Road Agreement of July 2010 helped facilitate a favourable decision for the Walker Quarry from the 2010-2012 Consolidated Hearing Board.

Clearview’s determination to utilize the “original” Side Road 26/27 right-of-way has resulted in seriously flawed planning and engineering design. Rather than use the traditional switchback road building strategy that prevails in the Escarpment region, the massive construction proposed for the re-developed Side Road 26/27 will launch a frontal assault on this section of the Escarpment Natural Area, with harmful ecological consequences. Of particular concern would be the destruction of the protective camp of Amabel Dolostone through intense hammering and possible blasting; the increased erosion because of unstable embankment side slopes; and the dramatic increase in the flow of suspended sediment down the road and into the tributaries of the Pretty River, thereby threatening fish and other aquatic life.

An essential part of the fundamental goals of the Escarpment Natural Area is not only to maintain the essential natural features, but also to encourage recreational and educational activities. In our opinion, the Clearview “reconstructed” Side Road 26/27 will have disruptive consequences for this entire section of the Escarpment Natural Area. Of particular concern is the negative impact on the ecotourist potential of the acclaimed Nottawasaga Lookout Provincially Life Sciences (ANSI) Park, with its spectacular vistas of the Escarpment, and its wonderful natural heritage features. These include “356 vascular plant species, 11 mammal species and nine amphibian species, some of which are Species at Risk.”

In conclusion, we hope that the Environment Land Tribunal will recognize that the Blue Mountain Escarpment Natural Area has already endured a “Dufferin Gap” type of assault from the aggregate industry, and that to sanction the Clearview/Walker Side Road 26/27 project would represent a double indignity.

(Readers can obtain the documented version at avery@uwo.ca )