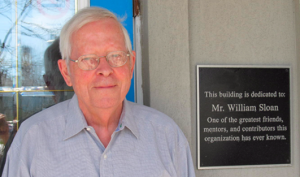 Watershed Trust is very fortunate to have Bill Sloan as our volunteer accountant.

Bill first moved to Collingwood in 2001 to work as the Treasurer for the Blue Mountain Village Association at Intrawest. Part of the reason for taking the job was the attraction of living in the area. For many years previously he lived in Toronto working as a Chartered Accountant for various corporations including VP Finance for George Weston Ltd.

Semi-retired, he is presently employed as a financial consultant to Elephant Thoughts. But his relationship with Elephant Thoughts goes well beyond that. He also donates a great deal of time as a volunteer. Elephant Thoughts’ new headquarters on Hwy 26 on the east side of Collingwood is dedicated to Bill. A plaque (pictured above, beside Bill) states: “This building is dedicated to Mr. William Sloan. One of the greatest friends, mentors, and contributors this organization has ever known.”

Bill’s volunteer work is so extensive that he has been awarded a Paul Harris Fellow from Rotary International as recognition of his volunteer contributions. Besides Watershed Trust, he has been Treasurer of the Elvis Festival, served on various Town committees including the 2008 Ontario Paralympic Winter Championships and Doors Open, and he has sat on the board and several committees of Collingwood General and Marine Hospital.

For fun, he likes to play tennis and travel. He also hikes. He is a trail captain, responsible for checking several wooded kilometres of the Bruce Trail in the Castle Glen area.  He’s a member of both the Bruce Trail committee and the Collingwood Trails committee.

Like so many people drawn to this area, Bill has an interest in protecting the environment.

He believes in supporting organizations that increase awareness of our fragile environment. He says that every small action has an impact and he hopes to promote the message that it’s important to maintain, sustain and protect the environment. We at Watershed Trust are grateful for his support.