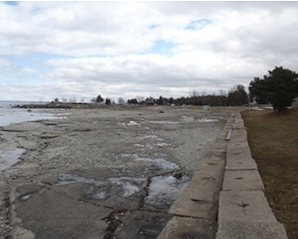 A new report from the International Joint Commission
By George Powell

Low water levels in Georgian Bay clearly are negatively impacting local boaters, marinas and shoreline property owners. Near shore off Sunset Point is barren in appearance and not a pleasant sight.

To date, water levels on Georgian Bay continue to sit below the historic chart datum of 176 metres above sea level and last December and this January were at all time recorded lows. This year’s spring freshet has been modest as snowfall was lower than normal. As of May 1st the bay water level is at 0.215metres (8-1/2 inches) below chart datum.

The most recent International Joint Commission’s (IJC) report to the Governments of Canada and the U.S. in April 15, 2013 is “based on the results of this recent five-year, peer-reviewed Study published in March 2012 and informed by diverse public input, including nearly 3,500 comments.

The Commission heard from the public about stranded docks, struggling marinas, parched wetlands, exposed shoreline protection and empty expanses of muck, rocks and weeds where families used to swim. Current record low levels on Lake Michigan-Huron have exacerbated these concerns. The Commission also heard from lakeshore residents concerned by damages from periods of high water. The latest hydroclimatic research indicates that while future levels are likely to be lower on average, the range of Great Lakes water levels over the next 30 years is expected to be similar to the past.

This means that the two federal governments must be prepared to address both low and high water levels.

1. The report Endorses the Lake Superior Regulation Plan 2012. The Commission has begun preparation of a Supplemental Order of Approval to implement the improved plan this year. The control structure in the St. Mary’s River at Sault Ste. Marie will allow more water to enter Lakes Michigan-Huron if the levels in Lake Superior are above historic chart datum.

4. The report endorses implementation of a comprehensive Adaptive Management approach to provide decision-makers with monitoring and modelling information that support review and adjustment of programs and policies. Recommendations include periodic bathymetric surveys and maintenance of streamflow gauges in connecting channels as well as evaporation monitoring instrumentation.

For the first time, all technical reports and supporting data linked to the Study recommendations are available at www.iugls.org

Lana Pollack, U.S. chair of the Commission, chose not to sign the Commission letter. Chair Pollack said the letter places insufficient emphasis on climate change and the need for governments to pursue and fund adaptive management strategies in the basin. She also cautioned against raising “false hopes that structures in the St. Clair River, if built, would be sufficient to resolve low water levels of Lake Michigan-Huron, while at the same time causing possible disruption downstream in Lake St. Clair and Lake Erie.”

In discussions with water-resource experts in our area, they recognize the social, economic and environmental challenges associated with current low-water levels but point out that these levels have actually resulted in an expansion of endemic Great Lakes Coastal Marsh communities along the Collingwood shoreline. These globally rare communities are restricted to shallow limestone bedrock areas along the Great Lakes shoreline and are adapted to the day-to-day/seasonal/long-term water level fluctuations of Lake Huron/Georgian Bay/Lake Michigan – they appear to need these fluctuations to persist. The marshes were relatively limited in extent during the late 1980s high-water period but have expanded significantly with ongoing low water levels.

Significant regulation of seasonal/long-term water levels would, over time, likely eliminate these rare communities and wetlands would likely become less complex – biodiversity would be impacted. Loss of coastal marsh biodiversity and function associated with regulation of Lake Ontario water levels is well-documented and shows the impact where water levels are not allowed to fluctuate naturally.

On the other hand, studies at McMaster University have identified some 3,771 distinct wetlands on the east and north shore of Georgian Bay. These wetlands are known to be habitat for fish and amphibians, they are vital to their spawning and protection of their young. Continued declining water levels will certainly impact their habitat. Pat Chow-Fraser, Professor of Biology and Director of Life Sciences at McMaster University states that since 1990 we have already lost 25 per cent of the submerged habitat and for every 25 mm of drop we lose 7-8 per cent more. In Severn Sound, she states that since 2000 the entire historic Muskie spawning areas have gone. Sturgeon on Georgian Bay will no doubt be likewise impacted in a manner similar to stocks in Lake St Clair.

The fishery has been impacted by the loss of coastal wetlands as 80 per cent of Great Lakes fish need wetlands at some point in their life cycle. Most of the wetland loss has been the result of development or earlier pollution but now dropping water levels is a major concern. Wetlands can survive and benefit from water level fluctuations as was previously mentioned and in the past have seen a more or less 7 to 10 year cycle. This year will be the 14th year of continued water level decline and Georgian Bay now sits at an all time recorded low.

Silver Creek Wetland will be stressed by both continuing development and lower water levels. The trout and salmon spawning runs make Silver Creek a high-quality natural spawning area. Bass spawning beds off Brophy’s lane in East and West Black Bass Bay have been seriously impacted by low water levels. There are no quick fixes and continued pressure on our politicians at all levels is needed to address this problem. Public pressure is needed to help speed these changes.