By Don Kerr, Member of WAG and WT Board of Directors

The graph of global surface temperature (below) has a red line up the middle showing the 132-month running mean that takes out solar cycle variability and El Nino/El Nina warming and cooling cycles. It also shows the 12-month running mean in blue (zigzag). The blue line shows the pause in warming due to the strong El Nina event from 1998 to 2008. 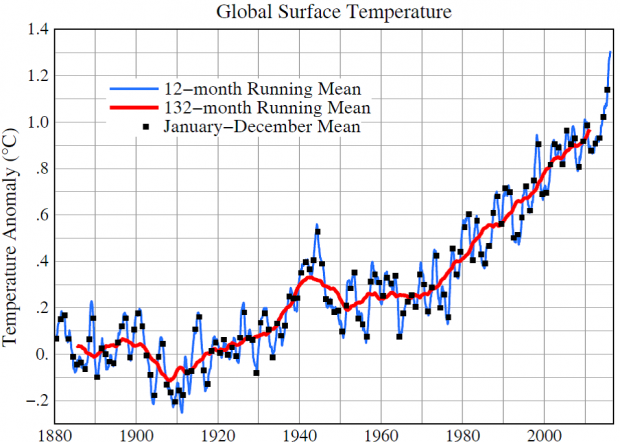 Chart above: Global surface temperature relative to 1880- 1920, based on GISTEMP analysis (mostly NOAA
data sources, as described by Hansen,J; R, Reudy, M.Sato and K.Lo, 2010: Global Surface Temperature
change. Rev. Geophy., 48, RG4004. In an upcoming paper they suggest that the temperature in
1940-1945 is exaggerated because of date inhomogeneity in WW II. Linear-fit to temperature since
1970 yields present temperature of 1.06 degrees C. This is perhaps our best estimate of warming
since the pre-industrial period.

Some who deny human-caused climate change have said that global warming had stopped, but the recent data and the 132-month mean show that it goes on and on. And it will go on and on for a few decades, due to the inertia of the global oceans, even if CO2 emissions are slowed.

Given the political climate in Canada and the rest of the world, there is no hope of preventing warming from going beyond the Paris target of 2 degrees let alone the 1.5 degrees aspirational target. The political climate assumes that economic growth is paramount and that the market is always right.

A recent article in the Guardian Weekly said: The back-slapping for the Paris agreement on climate change must be tempered by the reality that the treaty will not stop catastrophic warming as it stands… Scientists say that the measures passed in Paris last year…set the world on track to a temperature rise of about 3 degrees C over the next 50 years – enough to render many poor countries uninhabitable.

In the Oct/Dec Peace Magazine, L. D. Harvey (Geography professor, U of T.} has several interesting quotes: …it’s hard to see how the global mean warming could peak at anything less than 2.0-2.5C and even that will require some lucky breaks from nature… that the climate sensitivity is at the low end of the estimated range and that climate carbon cycle feedbacks are small. This warming… will severely strain food and water supplies in many parts of the world…unless future diets contain much less meat. Another large and unavoidable impact will be large losses of coral reef ecosystems as the oceans become more acidic… It is also likely we will lose 10 to 30% of terrestrial species over the coming century. But there is much that is beautiful and wonderful that can still be saved [abridged].

In terms of current impacts, two of the causes of mass migration to Europe are the global warming droughts in Syria and North Africa. Canada would be well served by adopting four resolutions [personal comments by the author]:

1. Climate change cannot be addressed without globally collective action by the high emitters. Canada must strongly support the UN IPCC in assessing national targets to determine whether they can meet the necessary reductions. If not, Canada must insist that IPCC demand new targets.

2. Canada should establish an independent scientific body tasked with quantification of national/provincial options for meeting our targets. It might be seen as a re-creation of the Round Table on Climate Change but renamed to reflect its role. Independence is essential. Several iterations will be needed to come up with acceptable plans. Monitoring and reassessment would be ongoing. Otherwise, we will never know whether we are on the right track until too late. This should start now.

3. With currently foreseeable technology, base load energy is required. Wind and solar sources are not capable of providing adequate energy due to their intermittent output, even with dramatic conservation efforts. Nuclear and hydro-electric energy are the only practical base-load sources to avoid planetary catastrophe in the interim while we await new energy storage technology. The risks are miniscule compared to the risk of failure to hold global warming in check.

4. The fourth problem is to understand the political impediment to realizing these goals. It is the pervasive neo-liberalism that has governed most of the planet since about 1980, driven by corporate interests and their political allies who believe there is no alternative to market capitalism and economic growth.