Blue Mountain Watershed Trust asked the Wynne Government in April, 2017 for a Part II Order, an environmental assessment to consider the environmental effects of reconstructing Sideroad 26/27 before the project proceeds.
We were directed to the Ministry of Environment and Climate Change and they indicated that they would await the completion of the Tribunal hearing before completing their review of the Part II Order we requested.

After a period of more than two years, and ten requests for deferment of the preconference call by the Township of Clearview, still no firm date for the Tribunal hearing has been set. Clearview has now indicated there are additional wetlands not documented in their original Niagara Escarpment Commission (NEC) application. As a result they have made an application to NEC for an amendment to the Niagara Escarpment Plan. Based on the delays and recent findings there is a serious reason for reconsideration of a Part II Order and suspension of the hearing process. We have written to Rod Phillips, Minister of the Environment, Conservation and Parks asking again for a Part II Order. We requested that the NEC Appeal Hearing for Side Road 26/27 and the recent Niagara Escarpment Plan Amendment Applications be dismissed or postponed until a Municipal Class Environmental Assessment (MCEA) has been carried out that properly addresses public concerns and better alternatives to reconstructing Side Road 26/27.

Clearview persists in following the inappropriate level of MCEA

The initial failure by Clearview to carry out the appropriate level of environmental assessment led to the November 2015 decision of the Niagara Escarpment Commission to overwhelmingly reject the Clearview application for a development permit. Clearview appealed this decision to the Environmental and Land Tribunal. In September 2016, because of the presence of additional wetlands, Clearview reported its intentions to first obtain an amendment under the Niagara Escarpment Planning and Development Act. It is generally assumed that the amendment process would now demand an in-depth environmental assessment, and a public hearing.

At the crux of this matter, despite requests to do so by the Trust, NEC and the public, is the failure by Clearview to carry out an appropriate level of Municipal Class Environmental Assessment (MCEA). Clearview has persisted in proceeding with a Schedule “A+”MCEA”, a schedule normally used for routine type projects that have minimal environmental impact, have essentially no public input and do not need to consider alternatives.
This is definitely not the case with Clearview Side Road 26/27. The road is situated almost entirely in Escarpment Natural and Escarpment Protected lands, the most ecologically sensitive Escarpment land zone designations. It is located at the headwaters of a tributary of the Pretty River, a cold-water stream with Brook Trout. There are groundwater seeps and springs flowing within the road allowance and under the road. The steep road gradient during spring freshet and storm events results in severe erosion carrying clays, silts, sands and gravel downstream. Clearview’s maintenance efforts have compounded the problem by repeatedly applying quantities of road base material to fill potholes without properly addressing drainage and erosion control issues. Erosion is having a significant negative impact on the aquatic systems and fishery.

Many years ago when Side Road 26/27 was originally laid out, it was based on the Ontario grid system with no concern about topography and natural heritage features. Over the years it has been mainly unused and much of it is single- track lane. While it remains closed in the winter from the brow of the escarpment to Concession 10, the three permanent residences on the side road are all serviced year round from the top.

As party to the appeal, the Trust has requested Clearview provide the additional wetland information. As of this date they have not. As a result, the Trust engaged an expert in wetland designation to carry out an independent assessment. Our aquatic biologist confirmed the presence of a significant number of additional wetlands and was of the opinion that redevelopment and expansion of this road is undesirable and negatively impacts the fishery and aquatic environment. We also engaged a civil engineer. He suggested a road alternative through the existing Walker Quarry that can be constructed at a gradient less than either Side Road 26/27 or former County Road 91 (presently proposed by Clearview to be transferred to Walker Aggregates Inc.).

Clearview’s plan to reconstruct Side Road 26/27 as a minor undertaking, under a MCEA Schedule “A+” project shows a serious lack of understanding of the MCEA process and the value it brings. The time being taken in preparing the appeal application reveals there are major environmental issues that need to be addressed and were not in Clearview’s original submission.
If a proper schedule of MCEA had been carried out in the first place the concerns of the Trust and local citizens could have been properly addressed at far less cost and in a more timely and efficient manner. It’s time for a Schedule “C” MCEA to be carried out on Side Road 26/27. 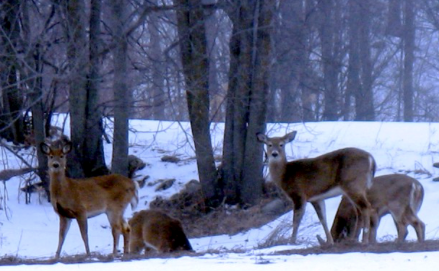